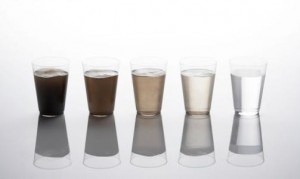 Activated carbon is an extremely porous material that attracts and holds on its surface harmful chemicals by a process known as adsorption. Activated carbon water filter works by removing chlorine and most of the harmful organic chemicals in the water passing over the activated carbon and thus improves the taste of water and also removes bad smells in water.

When this happens, the concentration of pollutants in the treated water will be even higher than in the raw water being treated. The activated carbon filter cartridge must then be replaced before this happens. Most of the activated carbon filter elements say that they are good for so many litres of water. This quantity is based on a previously fixed standard quantity of contaminants in the incoming water. Your water may have more contaminants and so it is important to know the quality of your incoming water.